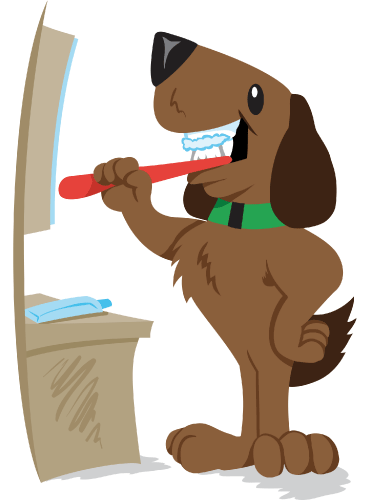 Dogs and cats have teeth typical of meat eaters. The teething of both begins at about three weeks of age, and at about 3.5 months they begin to change into permanent teeth. It is good to accustom the puppy to all kinds of handling, including the checking of teeth and the mouth. Milk teeth, especially the milk canines of small dogs, do not always fall by themselves but may stay in the way of the permanent teeth. The milk tooth has to fall latest when the permanent canine has grown to the size of the milk canine. If this does not happen, it is necessary to have the milk teeth removed by a veterinarian.

Different bones to chew help keep dog teeth healthy, but the best way to prevent tartar, inflammation of the gums and inflammation of the tissue which holds the teeth is their regular daily brushing. If brushing doesn’t happen and tartar forms, the pet has to be submitted to regular tartar removal. Tartar removal is carried out using a special ultrasound device when the animal is sedated.

Inflammation of the tissue which holds the teeth (periodontitis) will lead to teeth loosening / need to remove them. The so-called tooth-neck damage is also common in cats (resorption lesions, corrosion damage) which, when they reach all the way into the tooth core, cause pain. Such teeth must be removed.

Different accidents and damage may lead a tooth becoming chipped and consequently need root treatment and restoration, or removal of the tooth. These types of procedures are done under narcosis.

Much rarer than periodontitis or tooth chipping is the apparition of dental caries (tooth decay or cavitation) in a dog. Caries requires that the cavity be filled, or if it has gone very far, the most sensible thing to do may be to remove it.

A dog or cat does not know how to actually complain about toothache, so mouth problems have to be looked for and the health of the teeth should be monitored by the pet owner. A toothache may manifest itself as listless behaviour, changes in the way of eating, crankiness and other such symptoms.

The teeth of rodents, rabbits, hamsters, etc, grow throughout the lifetime of the animal. Teeth which have grown too long, or have worn unevenly and thereby formed sharp edges or spikes on teeth, make eating difficult, and may break the mucous membrane of the cheek and tongue and finally lead to the animal not eating at all. Dental problems are caused by the wrong food (for instance the lack of something hard to chew on) and teeth which are in the wrong position. Tooth spikes and molars which have grown too long are treated under anaesthesia. Front teeth which have grown too long can most often be cut when the animal is awake. If problems are caused by the wrong position of the teeth, with the teeth growing all the time new spikes may become a problem really quickly, even in one month.